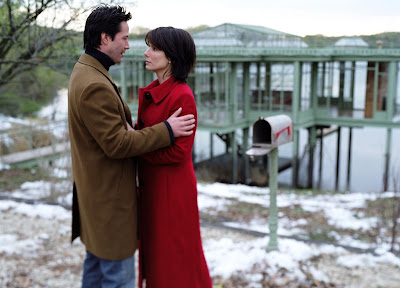 I however, wish that this movie is remade after a few years or so.. in a better way. It was good, but could get definitely better in many areas! Or maybe is there already some movie from which this was inspired? something that was done better? hmm... will have to look around on the net first..
[UPDATE] Thanks to my friend I found out that, there IS infact another movie just the same as this one.. and it came before this movie (lake House was inspired from that) and just as you guessed it.. it is infact better than this. Gotta get my hands on that movie soon :D
It's a Korean Movie named Siworae/ II Mare . Check it out :)
by Reeteshifier at 7:34 AM

Jeez. When I saw it in TorrentZ's most downloaded torrent's list even I thought Its Horror. lol.

Will watch it, not a fan of keanu reeves (his, The Day Earth Stood Still sucked). But yeah I do like acting of Sandra... and time traval - sci-fi... Every tech student loves it. Will watch and write my short review back here :)

Just updated the entry with the title of the korean movie it was "inspired" from (Siworae).

Either check that out or see this and then that :P or whatever you want :P


And yeah.. I just love Sci-fi and time travel and all those crazy stuff :P And sci-fifantasy+Romance when done right becomes just too awesome!

That sounds coo, friend!
I too, am not particularly fan of Keanu or Sandra, but the story's what apparently appeals to me...especially the time thing...
Hearing about letters...well, there are a few stories that I've read on the net where the main thing is through exchange of letters between the two characters...this is similar, but different :P
Would like to add that to my 'Things to do for the summer' cuz Im having real big responsibilities, which would prove fatal under failure(read more in my blog)..
Do give me your yahoo ID...wud like to chat someday:)
Otherwise, I've finished Golem's Eye, n the review't there in my blog..check it out.

My Yahoo ID? well.. I dont use that thing much..

fine:)
that was kinda cryptic :P